I am really looking forward to the online launch of The Politics of Women's Suffrage tomorrow which I feel very privileged to be speaking at. I am so proud that my chapter is included in this volume along so many other inspirational suffrage historians.

The chapter I wrote draws on my experience of bringing Sylvia Pankhurst's manuscript about America to light. That text has usually been interpreted as containing Pankhurst's critique of top-down models of reform and thus anticipating her subsequent radical, grassroots organising in East London - and that's true. But when I read the text, I also saw that Pankhurst was praising other models of organising: ones that helped empower working-class women.

The chapter shows that Pankhurst had hugely influential relationships with American women activists who practically, emotionally and financially helped her organise the East London Federation of Suffragettes. Those links had largely been forgotten up until now.

I am very excited to share the stories that I discovered in research that took me far and wide, from Haskell Indian Nations University in Kansas to Henry Street Settlement in New York City, from East London's Bow Road to a reading room in Aberystwyth where I read the articles Pankhurst sent under a pseudonym from America to be published in Keir Hadie's Pioneer.

You can sign up for the book launch here. 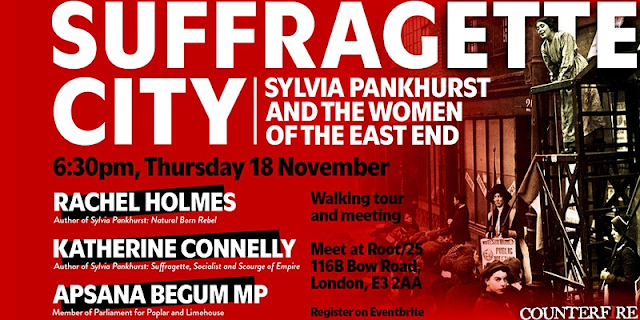 Really looking forward to this event tomorrow where I'll be speaking alongside legends Rachel Holmes, author of the brilliant new biography Sylvia Pankhurst: Natural Born Rebel, and East London MP Apsana Begum.
We will be walking a few of the sites where Sylvia Pankhurst and the East London Federation of Suffragettes campaigned, organised and made history. Then we'll be speaking about working-class women's history and what we can learn from them in the cafe right next door to where the East London suffragettes used to meet! For those who can't get tickets, the event is going to be streamed.
More details here.
at November 17, 2021 No comments:

Review of EMMELINE, The Cockpit Theatre

This review was originally written for The Reviews Hub.
Writer: Beatrice Hyde
Director: Anastasia Revi
This play about events over a hundred years ago is a play for right now.
Beatrice Hyde’s debut tells the extraordinary story of the militant suffragette campaign and its devastating personal consequences for the Pankhurst family.
The imperious Emmeline Pankhurst (Georgie Rhys), once evocatively described by the feminist writer Rebecca West as a ‘reed of steel’, is first encountered as a reforming Poor Law Guardian championing the cause of poor women locked up in a workhouse. Recently widowed, Emmeline is spurred to act when the local Independent Labour Party erect a hall in her husband’s name – and then bar women from entering.
Emmeline founds the Women’s Social and Political Union (WSPU) to fight with ‘deeds not words’ for votes for women, and her three daughters eagerly enlist as activists in the cause. The eldest, Christabel, is her mother’s indulged favourite, the middle daughter, Sylvia, is the romantic artist, while the youngest Adela strives for attention amongst the other more charismatic Pankhursts.
Government intransigence results in the WSPU escalating its militant tactics, hauntingly depicted in this performance. Imprisoned suffragettes place birdcages over their heads, simultaneously evoking the claustrophobia of the cells and a classic nineteenth century metaphor for women’s oppression (“She’s Only a Bird in a Gilded Cage”). In the background, the cast incant lyrics written by a suffragette imprisoned in Holloway.
Some of the most chilling scenes are those depicting police violence against the suffragettes. Watching this after Sarah Everard, Nicole Smallman and Bibaa Henry, the suffragette struggle suddenly feels very close and unfinished. This is no longer a play about the past, but about the urgent need for women’s equality today. The lyrics to another suffragette song performed by the cast remind us: “The vote in itself is just nothing, / ‘Tis only a means to an end. / Look round you – look under the surface, / And see what we’re seeking to mend.”
At the heart of the play is the fraught relationship between Emmeline and Sylvia Pankhurst. It shows in detail how the failure to win a speedy victory posed dilemmas for them about their loyalty to their ideals and family. Emmeline responds to these pressures by abandoning her socialist politics, endorsing proposals to enfranchise a wealthy minority of women. She becomes increasingly autocratic, demanding absolute loyalty from a relatively small group of militant activists.
It is Sylvia Pankhurst (played earnestly by Charlie Hansen), who appears in the most sympathetic light as she struggles to navigate her loyalty to her mother and the women’s cause on the one hand and her commitment to working-class emancipation and her love for the married Labour leader Keir Hardie on the other. In place of an elitist struggle, Sylvia calls for a democratic mass movement – for which she pays a painful personal price.
Given the play’s focus and Sylvia’s call to make working-class people agents of change it is surprising that her breakaway campaign in East London is only alluded to and not dramatized beyond a few awkward crowd scenes. That Sylvia starved herself on the steps of the Houses of Parliament and nearly achieved a breakthrough in negotiating with the government, forcing the Prime Minster to meet working-class East Londoners face to face, is surely important evidence that her alternative, more radical strategy could have been effective – and it would have made good theatre.
In general, the play is overly narrative: too much is told when it would have been more effective to show. But no one will leave the theatre without feeling that we can better confront the injustices of today with the inspiration of the suffragettes in the past.
Runs until 14 November 2021

Last month I had the great pleasure to join Rachel Holmes, author of the magnificent Sylvia Pankhurst: Natural Born Rebel, in a discussion of women's history at Counterfire's 'Revolution!' festival. Here we explained why the struggle for women's liberation is a necessarily revolutionary struggle. You can find the other excellent talks from the Festival - including discussions of Palestine, Fred Hampton and revolutionary theory - on the Counterfire website. You can find my review of Rachel Holmes' biography here.
at August 07, 2021 No comments:

Happy Birthday Sylvia Pankhurst! In honour of the occasion, I am delighted to be able to share a new piece of research published in Chicago History, the publication of the wonderful Chicago History Museum. You can access it here. In it, I show how Pankhurst's support for the striking garment workers in Chicago led to her forging important friendships with labour activists including the novelist Miles Franklin and Zelie Emerson - who later helped establish the East London Federation of Suffragettes. I share some facsinating stories about Emerson, who played a crucial role in the garment strike, that shed some light on this often overlooked, but immensely interesting, individual - including her intervention in a husband and wife's quarrel over a "votes for women" banner on their house! The piece has been lavishly illustrated, which really brings these stories to life. Huge thanks to Chicago History and the Museum for kindly granting me permission to share this on my blog. I hope that this is enjoyable to read as it was to research and write. Any comments welcome. Watch this space for more research on Emerson! 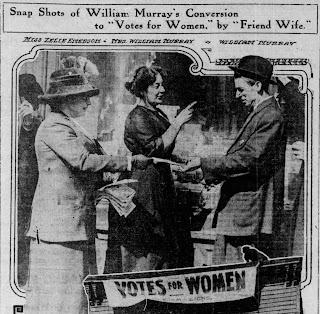 Image of Zelie Emerson reconcilling William Murray to the banner on his house, from Chicago Tribune, 4 April 1912.
at May 05, 2021 No comments:

Warm and comradely thanks to the Socialist History Society for inviting me to talk about Sylvia Pankhurst in America and for making the film of the talk available online. You can watch it here:
at May 04, 2021 1 comment:

After a year of lockdown, and consequently few opportunities to have meetings and events, I am delighted to be able to announce an upcoming talk about Sylvia Pankhurst and her travels in America hosted by the lovely Socialist History Society on 15 April at 6.30pm. The event is of course online and you need to sign up in advance here. Attendance at the event will allow you to buy Sylvia Pankhurst: Suffragette, Socialist and Scourge of Empire and A Suffragette in America at a 30% discount. 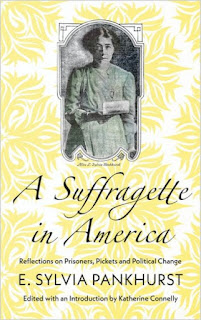 Katherine Connelly
Sylvia Pankhurst's 'A Suffragette in America' is edited and introduced by me. I am also the author of the biography 'Sylvia Pankhurst: Suffragette, Socialist and Scourge of Empire' (2013). Contact me at connellykatherine778@gmail.com